The Multi-Hazard Risk Assessment, or MHRA, provides a comprehensive understanding of existing earthquake and flood risks along the Embarcadero and establishes a basis for the development of Proposition A projects.

Findings from the MHRA are key to understanding which areas of the Embarcadero waterfront are most at risk, the likely consequences, and what areas to focus on first. By understanding the potential consequences of earthquakes, the Port, policymakers, and the public will be able to make better decisions on where first bond investments should be made. The priorities for the first projects and bond funds are to improve life safety and disaster response.

Based on the MHRA findings and stakeholder engagement, the Port is formulating project alternatives - incorporating seismic and flood risk reduction whenever possible - for the Embarcadero Seawall Program with a focus on identifying the Proposition A projects for Port Commission approval by the end of March 2021.

Learn more about the MHRA through this short "Explainer" video:

In addition to helping the Port develop important tools, the MHRA significantly advanced the Port's understanding of the risks and consequences associated with earthquake and flood risk along the Embarcadero waterfront.

For example, we now know:

Earthquake risk to the waterfront is severe, and the consequences will be expensive.

Through the MHRA, we have predictions of physical damages and economic losses across four earthquake levels (minimal, moderate, high, and severe). Economic cost estimates include cost of repairs and replacement, loss of building-related contents, business interruption and relocation, lost wages, and lost rent to the Port. These estimates allow us to quantify the fiscal benefits of investment.

The waterfront is very sensitive to flood thresholds, with significant consequences.

The Port has data for predicted coastal flood damages for buildings and major infrastructure exposed by Seawall "overtopping," which is when water, from a storm surge or a wave, reaches over the shoreline and causes inland flooding. The Port also has the first flood-mapping of the City that includes wave action, an important contributor to flooding.

In addition, the Port understands the specific consequences of earthquake-and flood-related damages to: disaster response systems (earthquake only), utilities, transportation, historic districts and resources, public spaces, maritime industries, land use, and environmental assets. This allows the Port to prioritize available investment in areas where it will provide the greatest benefit - including emergency response and life safety.

Key Earthquake and Flood Findings for the Embarcadero Waterfront

MHRA results are helping the Port and the City better predict which buildings and infrastructure are expected to be safe from hazards. For more information on the results by waterfront location, visit the Waterfront Resilience Story Maps.

The Ferry Building is one of the highest risk areas, from both earthquakes and flooding.

This area has some of the lowest elevations along the Embarcadero Seawall, where the sidewalk and roadway are regularly overtopped by Bay waters during storm events and extreme tidal events. Additionally, this area's proximity to historic Yerba Buena Cove results in significant risk from earthquakes due to the very deep Bay mud. Further seismic analysis is required to better understand the impacts to the Ferry Building itself in various earthquake scenarios. 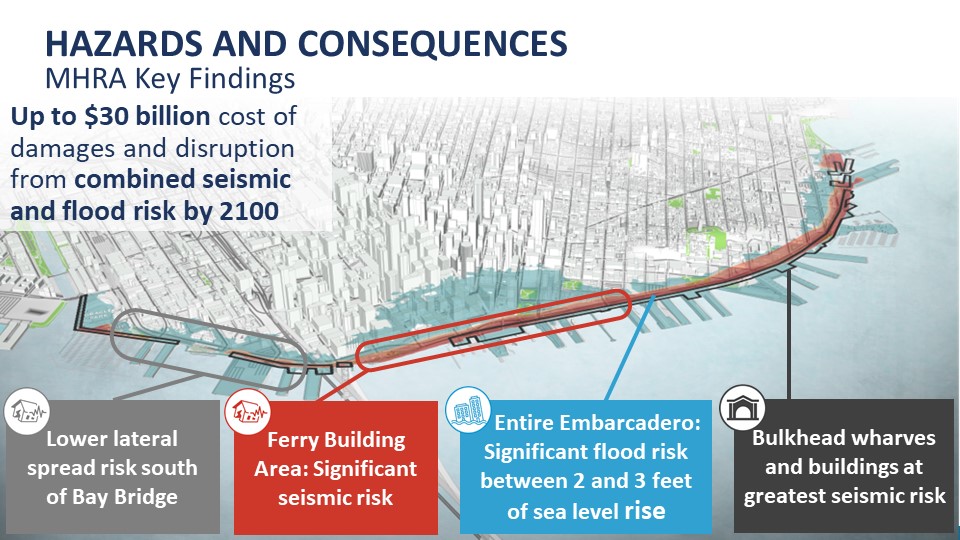 Historic buildings and bulkhead wharves are at high risk.

The bulkhead wharves are structures located where the pile supported piers over the Bay meet the land. These structures are interconnected with the Seawall and support the ornate, historic bulkhead buildings that line the Embarcadero.

Bulkhead wharves are the ornate, historic buildings on the Embarcadero that join together the pier and the street. Bulkheads are supported by piles underneath the water and are interconnected with the Seawall. These structures are at high risk of earthquake damage and will flood with increasing sea levels. 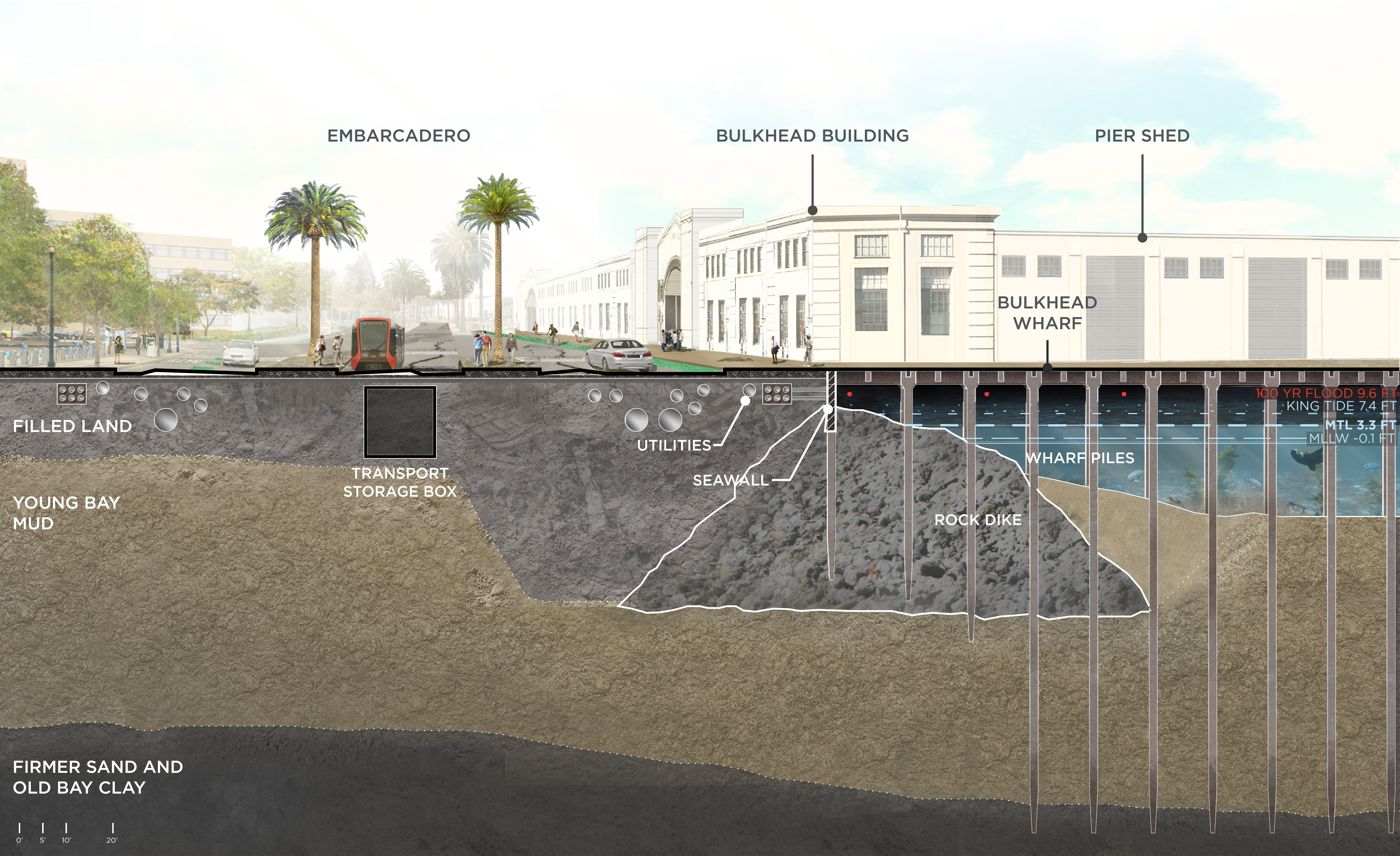 The Seawall's earthquake instability is lower than South Beach.

Lateral spreading and Seawall movement is not expected to be a problem in the area, but strong ground shaking is expected to damage wharves and the roadway.

The Port will use MHRA results to brief waterfront tenants about seismic and flood risks and discuss opportunities for making facilities safer. Fisherman's Wharf was consistently identified as an important area through community engagement. 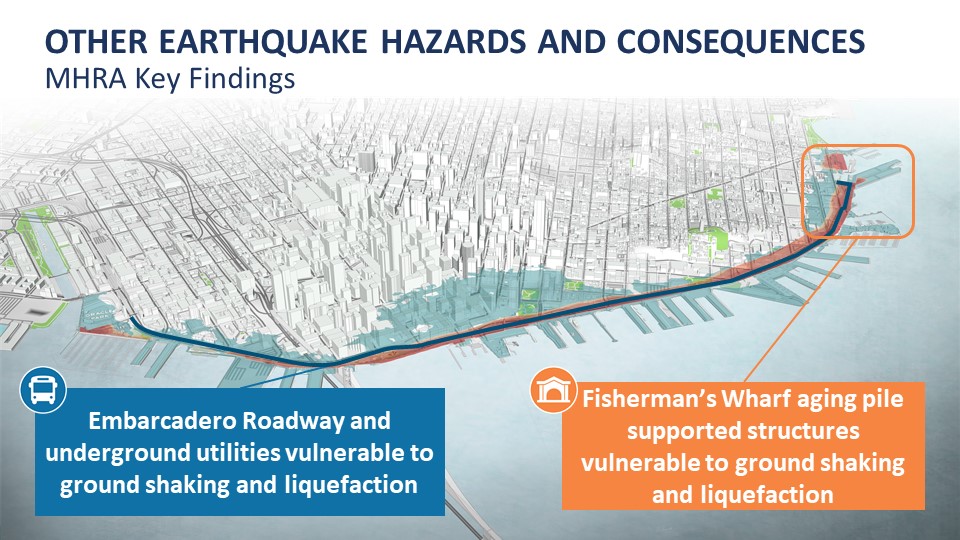 The MHRA is a key component of the decision making process. However, much work is still to come.

Following completion of the MHRA, the Port developed strategies and solutions to reduce risk. The Port's goal was to identify "measures" that are most appropriate to protect the different conditions along the waterfront in ways that reflect city and community priorities, combining seismic and flood risk improvements wherever feasible and cost-effective. Learn more about measures under consideration via the Port's Measures Explorer.